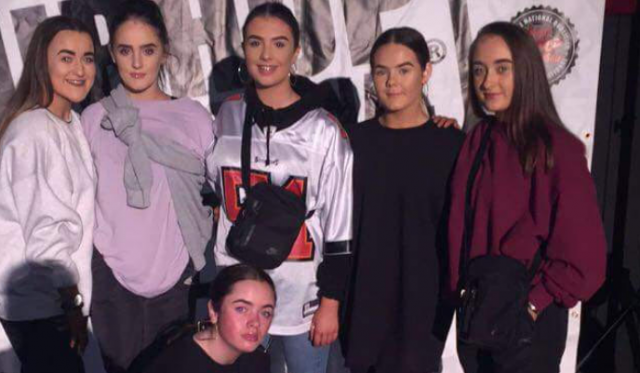 A talented crew of Donegal Hip Hop dancers is determined to compete in the World Hip Hop Dance Championship in Phoenix Arizona.

Based in Buncrana, the dancers qualified for the World Championship by winning at the recent Ireland Hip Hop Dance Championship in the TLT Theatre in Drogheda.

This was not the crew’s only success this year. On St Patrick’s Day they scooped several first prizes at the UDO British Championships in Somerset.

Speaking to Donegal Now , Aoife McGill (17), a pupil at Scoil Mhuire said she and her friends “love to dance.”

Aoife said: “We have been training together for four years as a crew and we just love what we do. When our dance studio closed down last year and we had nowhere to train, we were devastated. But we determined to make our dream of representing Ireland at the World Hip Hop Dance Championship come true.

“Luckily, Ursula McDaid from The Plaza in Buncrana took us under her wing and, with the perfect place to train, we set to work.

“After speaking with the Elite Judge Meg, we got the go ahead for Phoenix Arizona, USA and the chance to represent Ireland in the World Hip Hop Dance Championship,” said Aoife.

Tasha Grant explained the dancers had set up a Go Fund Me page to help them raise the money needed to get to the World Championship.

She said: “We are really hoping that everyone in our community will rally around and help us. This is massive. No-one in Inishowen, in Donegal has ever got to the World Championship. We are the first dancers from here to get this far in Hip Hop.

“As well as the Go Fund Me page (https://www.gofundme.com/get-elite-to-phoenix-arizona), we are organising different events in the town. We recently held a quiz for the First Years at Scoil Mhuire. We are hoping that schools might hold No Uniform Days for us and we will visit the school and perform for the students. We have also received some donations from our local Donegal County Councillors. Thank you to them.

“In Phoenix we will be competing in the Crew and the 2 x 2 competitions, so during our summer holidays, we will be training as much as we can. We will be spending all day in the studio preparing,” said Tasha.

She said: “We will be packing bags one day in June and one day in July in Iceland in Derry. All of the details will be posted on our Facebook Page: ‘Get Elite to Phoenix Arizona’ closer to the dates.

“I was nervous and excited in Drogheda but Phoenix will be one of the biggest competitions of our lives and I really want to go.

“If we don’t do it this year, we might never get another chance. Five of us are doing our leaving Certificates next year and will be going off to university or college.

“To us, the World Hip Hop Dance Championship in Phoenix Arizona is a big as a sports person putting on a Donegal jersey and stepping out on Croke Park to play an All Ireland Final,” said Aoife.

Her friend, Niamh (McFadden) agreed. She said: “We want to do Donegal and Ireland proud. Ireland has never been properly represented at the World Hip Hop Dance Championship before and we want to get our flag up on that stage. We will do everything we can to bring some medals home to Inishowen,” said Niamh.