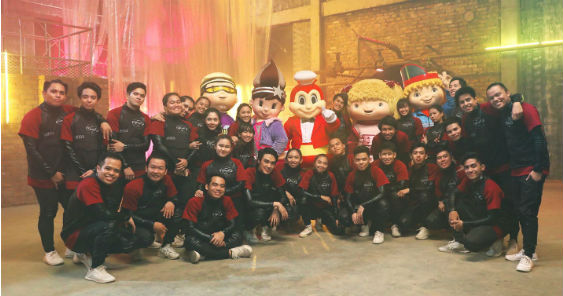 MANILA, Philippines – No one lights up a room faster than the Jollibee mascot. People of all ages go wild when they see him, especially so when he starts to dance.

In the latest #JolliDanceShowdown installment, Jollibee – together with his squad composed of Hetty, Popo, Yum and Twirlie – figured in an epic dance battle against UPeepz, the reigning 2016 World Hip Hop Dance Championship title holders from the Philippines. After performing with some of the Philippines’ best dance talents in the past: first with street dance group G-Force and, more recently, with “Mr. Pure Energy” Gary Valenciano, this latest addition elevated the mascots’ dance credentials further.

The said monumental showdown that has, as of press time, already gained over 7 million views and over 86,000 shares reaching close to 22 million people exactly a week after posting on Facebook alone, all started with an intriguing exchange of tweets between Jollibee and UPeepz over the weekend.

Jollibee, known to challenge many a dance sensation, joined the conversation with a tweet, “Hmm… what’s up, @UPeepzOfficial? Heard you are going old school? Are you UP for a challenge?”

UPeepz, a multi-awarded mega dance crew from the Philippines with titles that include Hip Hop International Philippines, World Supremacy Battlegrounds Championship, and the World Hip Hop Dance Championship, known as the “Olympics of Hip Hop Dance” tucked under its belt, accepted the challenge of Jollibee to a dance battle.

It was the first time ever for Jollibee and Friends to engage in a friendly battle with the UPeepz crew to the tune of 80s hit “It’s Tricky”. The two groups took turns responding with epic dance moves and routines bringing to the public various street dance styles like urban choreography popping, locking, B-boying, waacking, stepping, botting, voguing, to name a few.

The video ended with the two squads’ joint dance performance. “We are very proud how our mascots have performed in this showdown and blown away by the immense talent that UPeepz has. We are happy that this video was able to help showcase their world-class talents,” remarked Francis Flores, Jollibee Global Brand CMO, on the outcome of the showdown.

“The passion, energy and the creativity of the mascot talents we all found inspiring! Imagine dancing performance and competition level in those mascot suits! They are legit, awesome dancers and we are just so happy to have been given the chance to dance with all of them. We have high respect for Jollibee and their mascot talents” says Beltran on UPeepz’s experience with Jollibee and Friends.

“Genuinely entertaining content has the power to engage the audience in deep, relevant ways strengthening brand love, which is something that this project and collaboration clearly prove,” says Pao Peña, Dentsu Jayme Syfu/Digit DNA Chief Experience Officer on the impact of the recently launched campaign.

The epic dance showdown between Jollibee and Friends and UPeepz has already earned several reaction videos from YouTubers in North America and Africa as of press time.

The video can be watched on the official Facebook page of Jollibee Philippines and can be searched through the hashtags #JolliDanceShowdown and #JollibeexUPeepz.