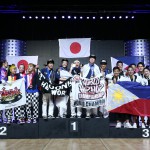 (Las Vegas, Nevada) At the same time the world’s best amateur athletes were competing in Rio at the Summer Olympic Games, the world’s best dance crews battled for the world title of hip hop dance at Thomas & Mack Center in Las Vegas at the 15th World Hip Hop DANCE Championship Presented by Paul Mitchell.  A crowd of more than 10,000 watched in awe as New Zealand and Japan doubled down with back to back world titles.  The USA captured two of three medals in the Adult Division.

National Champions representing 50 countries competed at the 2016 event and the top honors went to: 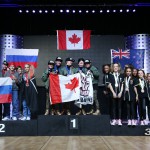 The Championship is organized by Hip Hop International (HHI), the group responsible for MTV’s highly successful America’s Best Dance Crew. Recognizing the growing popularity of hip hop music and dance and the significance of its culture on millennials and young adults Hip Hop International began with 12 nations in 2002 and has grown steadily to its current 50 countries from the far reaches of the globe.  In the process, Hip Hop International has emerged as the world’s largest and most respected street dance organization.

The crews were judged by an international panel of experts trained by Hip Hop International.  HHI’s judging system is the gold standard to judge national championships worldwide to assure that all participants compete on a level playing field.

The USA & World Hip Hop DANCE Championships have proven to be a reliable launching pad for professional careers in entertainment.  One of many examples is 22-year old Parris Goebel, a New Zealander who won the first of her seven World Championship medals at age 17.  She went on to choreograph tours and videos for Janet Jackson, Rihanna, Jennifer Lopez and most recently Justin Bieber. Bieber’s “Sorry” video directed by and featuring Parris surrounded by her dancers has been seen more than 1.6 billion times!   Cirque Du Soleil holds casting sessions during the Championship each year and hires choreographers and dancers for its shows worldwide.

The World Hip Hop Dance Championship has captured the attention of a worldwide audience through a variety of social media platform. For the 2016 event, Hip Hop International forged alliances with social media giants Snapchat and Twitch.  Both the USA and World Championship Finals were featured on Livestream broadcasts sponsored by Paul Mitchell.

Though its family-friendly events, Hip Hop International is focused on the positive elements of street culture by “uniting the world of hip hop through dance.”