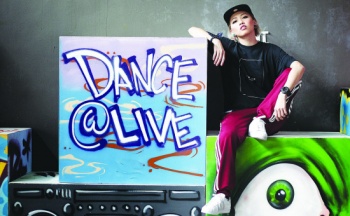 She has three other siblings, but remains the only dancer in the family. — Sunpix by Norman Hiu

BEING a female dancer in Malaysia’s male-dominated hip hop industry isn’t a bed of roses, according to Phang Sook Kuan, more popularly known by her stage name Seven.

Competitions can be extra challenging simply because she’s often going up against the guys, who are physically stronger and faster. “But I will not give up dancing for the world,” the 25-year-old added, undeterred.

Phang began dancing at the age of 14, and soon formed her first all-girl group, So Crazy. The unit did amazingly well and bagged numerous championship titles. In 2010, she found herself to be the only female dancer in another group, Katoon Network.

“The dynamics were totally different and I found myself working twice as hard as the guys to make up for my lack of stamina and strength. It has resulted in injuries at times, but at the end of the day, it is worth it. This has earned me the privilege to choreograph some of our dances, and that is a real honour,” Phang concluded.

Her efforts, which include daily practice and strength training, proved fruitful when Katoon Network was crowned champion at the 2011 Astro Battleground competition, following many other triumphs throughout the years.

First of all, could you tell us why you decided to use the name Seven?

The name actually came from a game we played in school where no real names were allowed. We drew numbers instead and mine was number 77. Everyone called me Seven and somehow the name just stuck.

How did you first find your love for hip hop dance?

When I was a teenager, I was inspired by the movie You Got Served (2004), which was really popular at that time. I truly admired the dance moves and loved how cool they looked. I began learning on my own from watching similar videos and movies. I later joined a dance studio where I met the first few members of my current crew.

What is your biggest achievement to date?

Our team was flown out to Las Vegas to contend at the 2014 World Hip Hop Dance Championship. Although we only made it through to the semi-final, it was an honour to participate in one of the world’s biggest hip hop dance tournaments! We hope to make it back again and win.

Which do you prefer: freestyle or choreography?

Definitely freestyle. There’s nothing like having the freedom to interpret music through your body in a spontaneous manner.

What do you think is your spirit animal?

A bird! I love the freedom of movement, and to be able to go anywhere I want would be amazing.

An oversized tee with a hoodie and baggy pants, cap and trainers. Because I’m quite skinny, wearing layered, oversized clothes would give me a better form when I dance.

What is your goal for the year?

I am working hard to be part of more competitions, especially ones that are held overseas. I also want to grow the hip hop scene in Malaysia and help break stereotypes that hip hop dancers are all hooligans. We’re pretty nice people actually!