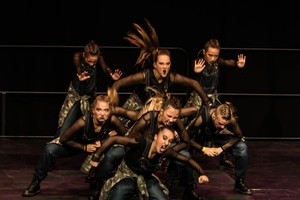 Northland dancer Alannah Curtis says her dancers are like her children, she sees them nearly every day in the leadup to major competitions.

Ms Curtis’ two crews Diamond Divas and DDF Crew both qualified to compete at the nationals where crews will battle it out for a spot at the Hip Hop International World Championships in August, in the US. She said a lot of time went into training for major competitions.

“It’s a lot of hard work. We spend hours practising, all our free time is spent training we can spend 16 to 30 hours or more per week training,” she said. “They’re like my children, I see them every day.”

Diamond Divas is the crew Ms Curtis puts most of her time and effort into in preparation for competitions.

“They did really well and they’re really proud. Our aim is always to win but that doesn’t always happen.”

Ms Curtis said the quality of hip-hop dance in both Northland and New Zealand was high.

Ms Curtis said she was also happy her adult crew, DDF Crew, qualified. She said with one Argentinian ballerina, a Swiss ballerina and three Northland dancers, including Ms Curtis, it was a last-minute rush to sort a routine.