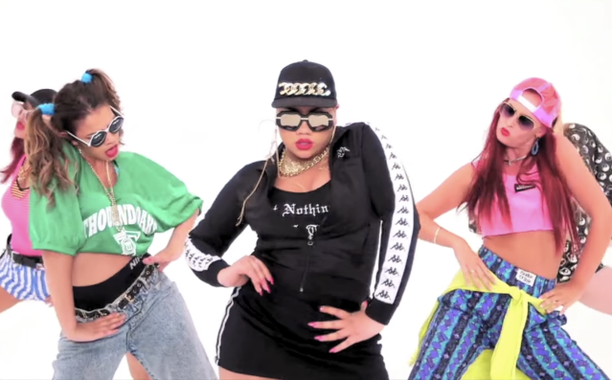 Justin Bieber released “Sorry,” the second single off his new album, with a music video of a group of women dancing. With their ‘90s-inspired outfits and synchronized moves, they helped rack up more than 400 million views. Weeks later, they showed up again when Bieber released music videos for each of his songs to makePurpose: The Movement, a short dance film. All of it was the work of a young choreographer from New Zealand named Parris Goebel.

In October, Justin Bieber was in the midst of his return, complete with a whirlwind of promotion that included awards show performances, TV appearances, and Instagram snaps reminding fans to preorder his album, Purpose. After the success of “What Do You Mean,” fans eagerly awaited the release of his second single, wondering how the pop star would present himself in this next stage of his comeback, especially with a song entitled “Sorry.”

But surprisingly, Bieber wasn’t in the music video. Instead, it featured a group of female dancers who captivated viewers.

To most people, these women were strangers, but those familiar with the hip-hop dance world recognized them as members of the all-female New Zealand dance crew ReQuest and its mega crew, The Royal Family, led by Parris Goebel.

At 24, Goebel has already made a name for herself as a hip-hop choreographer. She’s led The Royal Familyto world hip-hop dance competitions, traveled the globe to teach workshops, and choreographed for artists like Nicki Minaj, Janet Jackson, and Jennifer Lopez. So it comes as no surprise to those who know of her that she was tapped to create the visual component of Bieber’s new album.

Bieber’s manager, Scooter Braun, came across Goebel’s work and asked if she would be interested in taking on a big project for the singer. Once she said yes, the entire project was in her hands. “Do whatever you want,” they said, according to Goebel. In three weeks, Goebel produced and directed 13 original music videos from start to finish to create the dance short film Purpose: The Movement — a composition of different people, locations, concepts, costumes, and styles, which together showcase all the possibilities of dance.

“The priority for me was to create some amazing artwork that people all over the world could watch and connect with. Something timeless,” Goebel said.

The standout on the project is “Sorry,” a video that has more than 400 million views thanks in part to Goebel’s vision. She gathered the ladies of ReQuest and The Royal Family, styled them in brightly colored ‘90s outfits — much of which came from her own closet — and choreographed a dancehall piece that highlighted one of her favorite styles of dance. The project was originally meant to be the lyric video, but Bieber’s people liked it so much that they kept it as is, white background and all. Within days, the video garnered tens of millions of views, no doubt many from fans who had it on repeat in hopes of imitating the Kiwi dancers.

For the rest of Purpose, Goebel also enlisted the help of other accomplished performers she admired. Internationally recognized choreographers Keone and Mari Madrid created an intricate routine for “Love Yourself.” In “Company,” Goebel collaborated on a couples piece with Lyle Beniga, who most recently performed on Justin Timberlake’s “20/20 Experience World Tour.” “No Pressure” features 22-year-old Chicago native Ian Eastwood, who has choreographed music videos for Chance the Rapper and Vic Mensa.

“I just wanted to get people that I thought were really influential in the dance world and had a positive impact on the dance community,” Goebel said.

The inclusion of those artists also meant incorporating different types of dance. While Goebel is known for her distinct hip-hop choreography — which she describes as “masculine and feminine energy put together” — the videos spotlight a variety of styles like b-boying, krump, waacking, and even contemporary dance.

In all these videos, Bieber makes only two appearances, bookending the short film with “Mark My Words” and “Purpose.” Despite marking his return with a dance performance at the VMAs in August, Bieber chose to have others take on the creative aspect this time. In doing so, he gave Goebel the opportunity to introduce mainstream audiences to a new world of movement.

Since finishing the project, Goebel has barely had any time to stop and catch her breath. Already she’s traveled from New Zealand to places like Korea, Hong Kong, Los Angeles, and Houston. Most trips have been to perform or to choreograph, but her visit to Houston was for something extra special: an EP.

Somehow during her hectic year, she managed to find time to work with producers on an EP she hopes to drop next year. Although the upcoming months will be focused on her transition to music, she says it doesn’t mean her dancing days are over. After all, music and dance go hand in hand. And Goebel is fully prepared to juggle a fast-paced, creative, globetrotting lifestyle.