TV RECAPS | AMERICA’S BEST DANCE CREW: And the winner is… 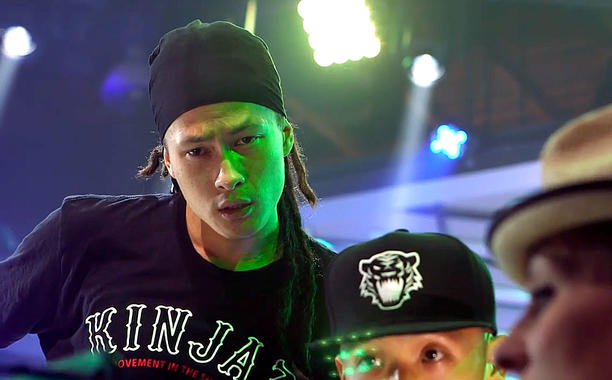 After six episodes, five eliminated all-star crews, four successful attempts by security to keep Lil’ Mama from crashing the set, three judges with constantly changing titles (everybody’s a choreographer!), and two shirts made entirely of glitter… one ABDC all-star champion was finally crowned. Why did it happen Saturday night instead of Sunday before the VMA, where this “road to the VMAs” was presumably leading to all along? I have no idea. But I do know which crew took home the golden b-boy trophy, $100,000, and most importantly, the title of ABDC All-Star Champion…

After the judges deferred their one job (one job!) to the voting public on Wednesday, over 95 million (95 million!) votes were cast to determine the winner in advance of tonight’s finale. So instead of worrying about proving themselves one more time, the three remaining crews just geared up for final performances that would either prove that America made the right choice, or make them rethink their votes with each new flare, flip, and mind-blowing stunt.

Quest Crew went first, performing to “SummerThing!” by Afrojack, feat. Mike Taylor, and they wanted to show off all the weird moves they’d edited out of their past performances. Though I guess that means you’re very literally showing something brand new, it was still an odd approach to their final performance in theory, but an interesting one in execution. They definitely pulled off a bunch of crazy and innovative moves — my favorite being what can only be described as a “complicated wheelbarrow” — and though it didn’t tell the kind of story we know they’re capable of, it didn’t need to. T-Pain, their assigned judge for the evening really gave them the hard sell: “From flipping on your balls, from getting kicked in your balls… you guys did a lot of stuff with balls in this season. There’s a lot of balls in this whole thing.”

Super Cr3w was next performing to “Judgment Day” by Method Man, and I personally think they gave a much more successful attempt at combining all of the craziest moves they had left into one cohesive message. This performance, with its incredible breaking solos and parkour flips directly off of each other’s bodies, reminded me now more than ever before that Super Cr3w’s success lives and dies on their ability to build off of each other and create more and more momentum with each new move. B-boying is not an exact science; there’s a lot that can go wrong, and the incredibly high stakes they built into each of their performances made the payoff of perfection just that much more exciting.

Kinjaz performed last to a very surprising “I See Fire” by Ed Sheeran, and frankly, it was nothing I was expecting. First of all, the entire performance was slow, and it made me wish that I had seen much more of this emotional side of the Kinjaz. Their pulsing movements and constantly rotating formation read like a beating heart, making the performance innately emotional both for the audience and for them. It was really quite lovely, and a completely different pace from anything else we’ve seen this season; there was no need for a big, show-stopping moment here, because the entire thing — if only for finally being able to see each crew members unmasked face — was a moment worth waiting for.

Of course, the other three champion crews from this season returned for a few group performances — I.aM.mE definitely had some stunts worth re-watching — and Jason Dundas filled at least half of the hour with heavy silences, but Saturday was really all about the final three teams, and after Super Cr3w made a surprising third place exit, just a seven percent difference separated Kinjaz and Quest Crew. And it was the true returning All-Star team that claimed the title once more.

Quest Crew may not have told as narrative a story as Kinjaz, or been as fully-realized in their style as Super Cr3w, but they undoubtedly had some of the best performances of this short season. They’re innovative, daring, bold, and most importantly, always fun to watch. So, do you agree with America’s vote? Is Quest really the BEST best dance crew, or will you be tuning back in in eight more seasons for another All-Star faceoff?