Las Vegas – It wasn’t all about competing at Hip Hop International 2013, but also about learning from the best as HHI organized a series of dance workshops called Urban Moves. Over 2000 participants took advantage of expanding their dance moves from choreographers who have worked in entertainment and television.

Napoleon and Tabitha D’Umo, who credit their rise to fame as the original show choreographers of America’s Best Dance Crew which so happened to be created by HHI, also shared their choreography with Urban Moves attendees. Considered one of the most successful husband and wife team, this Emmy Award duo has worked with pop legends such as JLO, Madonna, and Prince plus popular television shows like ABDC, American Idol and SYTYCD.

In addition to NappyTabs, several other Urban Moves Presenters come from the ABDC stage. They include instructors Mike Song of Kaba Modern, Ian Eastwood of Mos Wanted Crew and Chachi Gonzales of I.aM.me Crew. 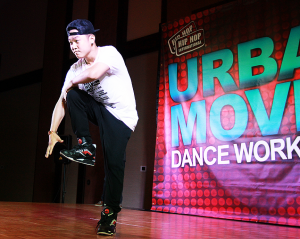 One of the most popular workshops was Parris Goebel’s, who hails from New Zealand.  In just a few short years, Parris has made her mark in the dance industry having been featured as a solo performer on “Dancing With The Stars,” and with her crew, Request,  with JLO on “American Idol.” Attendees clamored for spots to learn and emulate the “poly swag” style Parris and her New Zealand, “Royal Family” have been known for.

Rounding out Urban Moves was Miss Prissy and Misha Gabriel.  Miss Prissy brought the intensity of Krump to Urban Moves. She is known as one of the dancers who brought this dance style to the world stage and was featured in the documentary film, RIZE. As for Misha Gabriel, his face is familiar to many who love to watch music videos. If you look carefully you can spot this talented dancer/choreographer in numerous music videos of Janet Jackson. 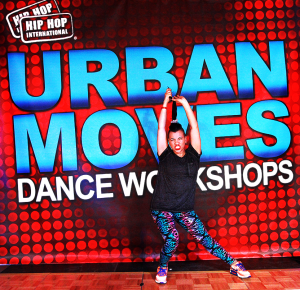 He has also worked with music divas such as Beyonce, Mariah Carey and Christina Aguilera and was selected to dance in Michael Jackson’s “This Is It” Tour.

Whether spectator or dancer, Urban Moves provided the ultimate opportunity to get up close, personal and learn from the best of the best.