THE WORLD’S BEST ARE GETTING READY TO COMPETE 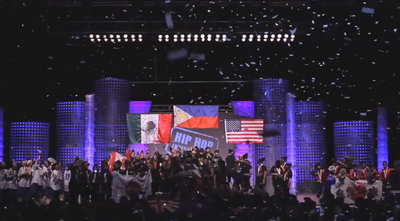 The prestigious and most respected events in street dance, Hip Hop International’s 12th annual USA and World Hip Hop Dance Championship and World Battles will take place August 4-11, 2013. With so many crews expected HHI has added an extra day to the competition schedule. In addition to crew competitions for 5-to-8 dancers in Youth, Varsity and Adults, the MegaCrew division for 15-to-40 crew members will return for the third straight year and promises to be bigger than ever.

If you want to be at the center of all the HHI action this year including daily competitions, Urban Moves Dance Workshops, nightly parties in the Chill Down Lounge and so much more make sure you are in Las Vegas this summer.

More countries than ever (over 40) will send their national winning crews and street dancers to compete in the 2013 World Hip Hop Dance Championship, which will begin with a gathering of nations at the Opening Ceremonies on August 6. The World Hip Hop Dance Championship begins August 7 with the preliminary and semifinal rounds and concludes at the World Finals on August 11 at the Orleans Arena. You won’t want to miss a single second of the non-stop action as the world’s best street dancers bring their best moves to Las Vegas. The World Battles – One on One Popping, Locking and All Styles Battles and Three on Three Bboy Battles are set for August 10 at the Red Rock Resort.

Presenters selected to lead this year’s Urban Moves Dance Workshops along with the name of the 2013 recipient of Hip Hop International’s Living Legend of Hip Hop Award will be announced soon. The 2012 award was presented to the Jabbawockeez! Who will it be this year?

Whether you are coming to compete, watch, learn and/or just have a great time, the game’s on for Hip Hop International 2013. Make your plans now to be there. Tickets are now on sale!

HHI’s host hotel and site of all competitions and battles (except the World Hip Hop Dance Championship Final), the Red Rock Resort is on pace to sell out even earlier this year. Reserve now