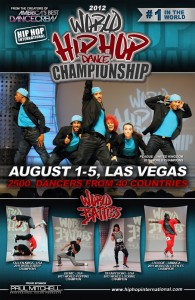 Since its inception in 2002, Hip Hop International was determined to unite the world through hip hop; bridging old school and new, studio and street, underground and commercial.  Ten years later, Hip Hop International proudly boasts licensed affiliates in 35 countries with national championships that draw thousands of dancers who compete under HHI’s common rules translated into 15 different languages.  With HHI’s early goals and dreams successfully realized, we are committed and determined to set the bar high for the next decade and reach for the stars once again.

Future plans for Hip Hop International include continued development in our five established properties: The USA Hip Hop Dance Championship, The World Hip Hop Dance Championship, The World Battles, Urban Moves Dance Workshops and MTV’s Randy Jackson Presents America’s Best Dance Crew.  We are currently planning and developing new exciting USA and Continental Championships and Battles.  Also ahead is our second TV series that will bring more attention to hip hop dance and interest in the artists who perform it.

Plans are underway to follow up a hugely successful USA & World Championships in 2011 with a grander and larger week of events for the 11th annual competitions July 30-August 5 in Las Vegas.  More dancers, more countries and over 5000 spectators are expected to witness the world’s best dance crews compete for bragging rights and the prestigious world titles. The newly introduced MegaCrew category for 15-40 crew members will be back with shorter routines (3 to 4 minutes) and no age limits for participants. For all the newest information and registration forms to all HHI events rollover the events tab above.