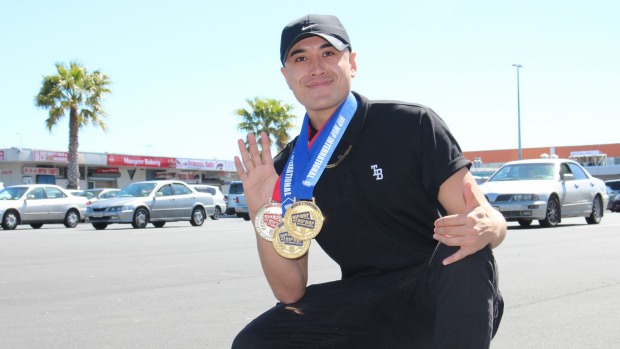 He is part of a dance crew called The Bradas that won again gold at the Hip Hop International dance competition in Las Vegas a few months ago.

The very next day of the competition, the boys were flown to Tokyo to shoot an ad video for the new Steinlager Tokyo Dry beer.

And in true celebrity style, after the shoot, they went back to Los Angeles for a week-long holiday and a few classes with choreographers there.

“We call it upskilling,” he laughs.

Skipper, 22, will also visit Chennai in India to judge a Bollywood competition this November.

But before the strobe lights, a cheering audience and media interviews, he was just a boy who wanted to dance.

It all started about a decade ago when he watched his older brother dance and got inspired.

Also, influenced by award-winning hip hop artists and dancers like Usher and Chris Brown he says he was “self-taught at first. I used to watch YouTube videos and would be like ‘oh man I wanna learn how to do that, I wanna dance like these guys'”.

While he has had a few cuts and bruises, he says he is “very lucky to have not been injured,” unlike a few of his crew mates who have broken a bone or two during practice.

What keeps him going are his “haters”. He says the people who try to put him down are the ones that are actually helping him push himself to newer limits.

When he’s not dancing, he says he’s “usually thinking about dancing. I’m probably at the gym, training, looking for new music because that also inspires us. I listen to a lot of R&B and slow jams because it calms me”.

The thing that “sucks” about being a dancer he says is “sending the invoice … because, I don’t have a laptop. I get paid well for corporate gigs, but what I get from community gigs just helps me get by … to pay my rent”.

He also works part time as a salesperson at Footlocker.

“I’ve got a stable job at Footlocker just in case I get injured and I can’t teach.

“I want to [be] a full-time dancer for as long as I can, and once my body has had enough, I want to move up to leading a company … creating shows for festivals around the world,” he says.

Next up is the change to be able to compete and win the VIBE Dance Competition which is a hip hop dance competition held in Southern California every year.

Unlike other celebrities, he doesn’t care about flash cars and bachelor pads.