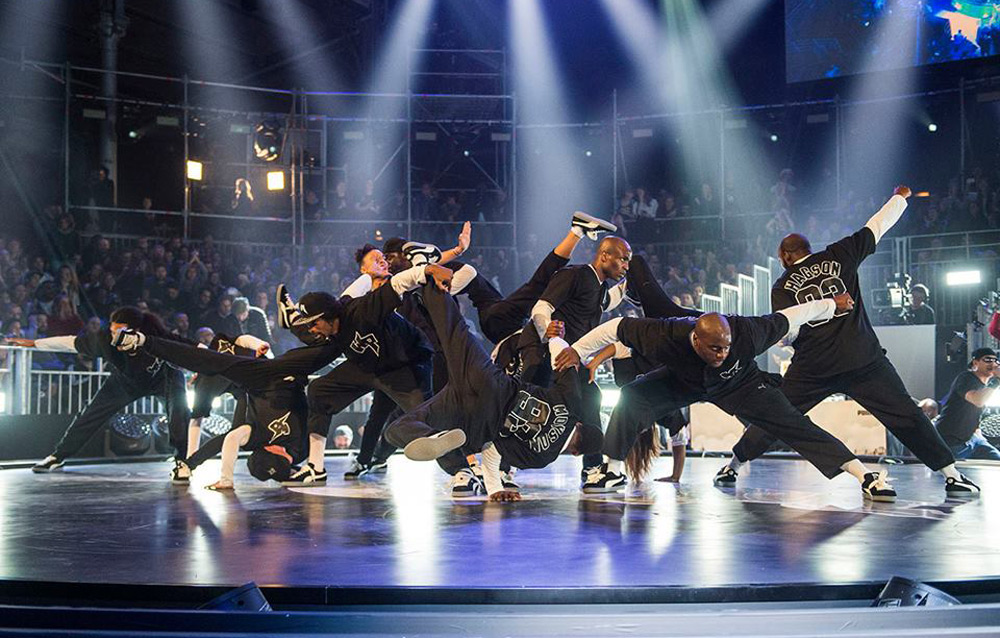 For over twenty years, innovative crew has marked the history of hip-hop dance by his inventiveness, his taste for battle, and its many projects. To mark the underground Circle, whose 11th edition takes place this weekend in Saint-Denis, return on a worship team.

The Wanted Posse  marked a whole generation of dancers popularizing a style, hip-hop “new style” that kind décloisonnait codes to enhance the choreographic appearance and personality of the dancers. Of the youth of Noisiel the  Ten Commandments , this band of Seine-et-Marne mates experienced a meteoric rise. Back on a stunning success story that has lasted over twenty years.

In the 90s in France, gesture enraged b-boys in New York goes out of fashion, giving way to the “hype”, a communicative and playful mix, as inspired funk styles (lock and pop ‘) that the break . Divan du Monde, the Globo and Queen, the dancers make the show at the “challenges”, a term introduced in the 80s cult show  HIPHOP TF1 to avoid anglicisms “battle”. The opportunity for youngsters to Marne-la-Vallée to practice the steps and combinations developed in the MJC. In 1993 they took the name of Wanted Posse. The crew is then composed of 6 dancers, two of which are still in control of the group today Lumengo Hugo (says Yugson) and Hagbe Djaguy (said Hagson).

Afterwardswe were there: the final of Juste Debout, the marathon of hip-hop dance in Paris

Abandoning the dancefloor, the six companions quickly turning to choreography, performing in small venues in the Paris region. They are joined by more and more members,Ousmane Sy (aka Babson), which has become a benchmark for dance house.
To N’Joya Ibrahim said Joyson, entering the group in 1998, it all started MJC in Noisy-le-Grand: “I was 16, I was just a little neighborhood that loved barouder well. With my friends, we watched Wanted dance through the bars, because they had no right to go when they were there! Then I started training with them, then I followed in clubs and later in competitions and performances “ .

While fleshing, the group becomes a formidable machine competitions. In 2001, he won in Germany the  Battle Of The Year , largest event of break time. VHS of the event, distributed and especially pirated worldwide, became a reference for many young dancers. This is a turning point for the reputation of the group, but also in the history of b-boying battles of: “We integrated hip hop” new-style “. In the US it was already a bit, but in Europe, it was unheard of! “ Remembers Hagson. ” We brought a breath of fresh air in this discipline especially valued the technique of each dancer. With this strategy, we have not suffered any defeat in three years “ .
Lumengo Hugo and Ousmane Sy find clips of American clubbers Chicago house and introduce movement during battles. An initiative that makes sense to the public. The Wanted then a string of victories  :  Juste Debout hip-hop new-style (2003, 2006, 2007, 2009), house (2003, 2004, 2006, 2012), but also break competitions like theMiami Pro USA or Hip-Hop International France .
These successes they open the doors to many more public art projects, including musciales comedies - the Ten Commandments (2000) and Sun King (2005), or the show Macadam, Macadam (2006) Blanca Li.

20 years old and still on top

If Wanted survived after so many years of collaboration, it’s probably thanks to the incredible versatility of its members: “It has evolved over time,” says Babson, now choreographer and teacher.  “Every age has its support predilection. In the 90s you had to be on TV, in music videos. In the 2000s, it was the golden age of musicals.Today, hip-hop still takes another turn through social networks “ .
If the spirit of Wanted continues, it is also thanks to the paramount importance that each member agrees to the transmission. In 2012, new groups emerge, which perpetuates the spirit of Wanted: Mamson created the 100% female  Havoc Ladies , Yugson, the trendsetter  DC Vortex , Joyson the percussive  The Kartel  and Babson electrical  Paradox- Sal . Yet these occupations do not affect the dynamics of the crew: “The various projects we have devoted ourselves have much enriches us. Our motto is individuality to the group of service “ says Joyson.

Now composed of 22 dancers, the Wanted continues to create shows, always mixing styles and genres. They have since 2015 Hybrid , choreography by Njagui Hagbe where urban dance and classical guitar meet. Their next show,  Step on Strings , will combine the talents of a string quartet, a pianist, a ballet dancer, in addition to hip-hop gesture, they care.

In addition to participating in competitive worldwide, the crew also organizes one of the biggest battles in France: Underground Circle , which prides itself together “la crème de la crème of international dancers.”  This eleventh edition will invite Koreans, Japanese, Cambodian, French and Kazakhs, who will compete to win the ultimate trophy … the t-shirt of their opponents!