LA Times: ‘America’s Best Dance Crew: Road to the VMAs’: On a Quest for the show’s future 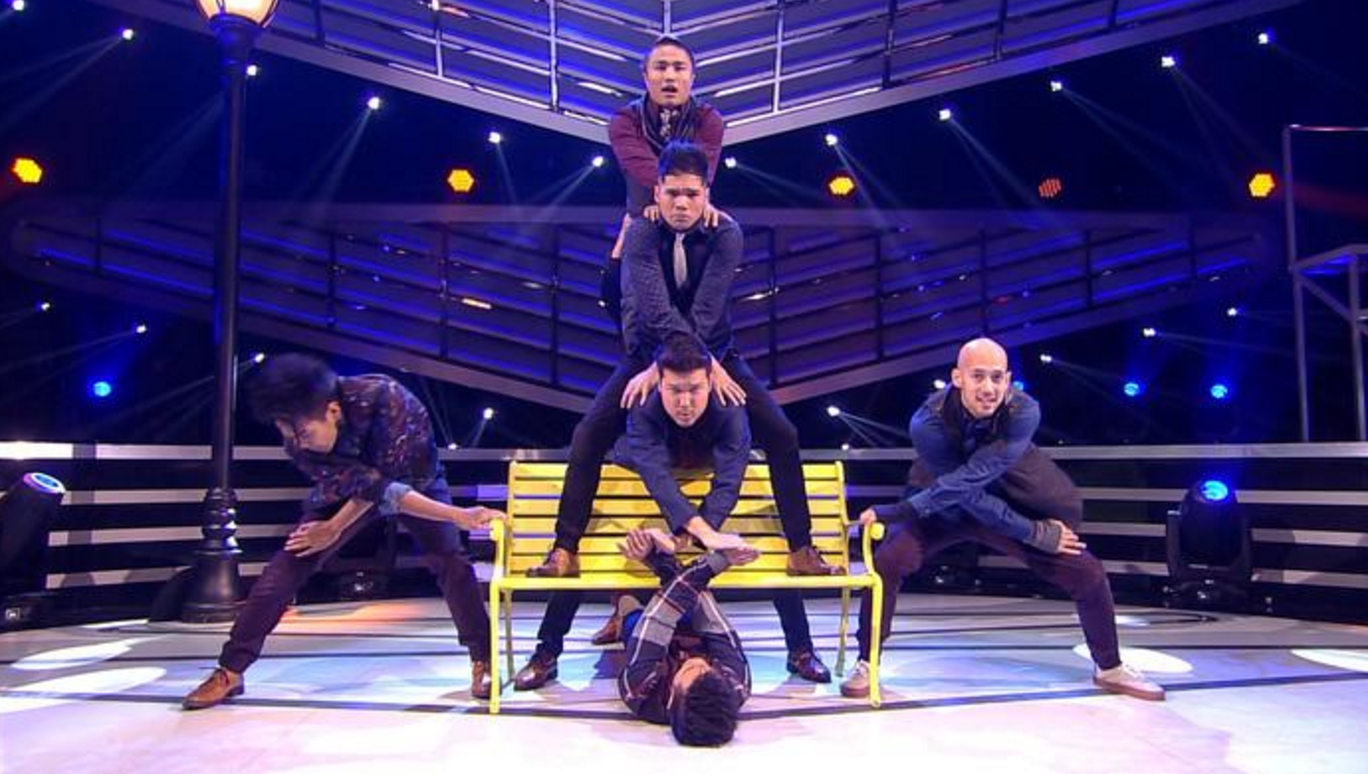 Reboots, revamps and relaunches of television shows have a hit-and-miss success rate — “Battlestar Galactica” was great, “Knight Rider” not so much — so for one like “America’s Best Dance Crew: Road to the VMAs” to be brought back and even do exactly what fans have been clamoring for is a real anomaly.

In this eighth season of the show, three years after the seventh season, MTV revived the dance competition as a six-episode lead-in for the Video Music Awards, pitting previous season champions against one another. Champions from season 2 (Super Cr3w), 3 (Quest Crew), 4  (We Are Heroes), 6 (I.aM.mE) and 7 (Elektrolytes) competed for the golden b-boy trophy, the title of the ultimate best dance crew and $100,000. One more crew that was added, Kinjaz, has members from the now legendary season one winners, Jabbawockeez, and one of the show’s most popular crews, Kaba Modern.

And who came out on top? Season 3 champs and now ultimate dance crew champs Quest Crew! Quest may have been the group, besides Las Vegas strip headliners the Jabbawockeez, who most benefited from the show’s spotlight after their season 3 win. On worldwide tours and in music videos with the likes of LMFAO and Snoop Dogg, they’ve gotten some high-profile gigs after being on the show. And now they can claim to be the best of the best.

The show’s final episode aired Saturday night in a live show. The previous episode enjoyed only a .2 rating, with this season averaging about half a million viewers. It’s a far cry from the heights it enjoyed in its heyday when it averaged almost 3 million viewers, but the show enjoys a niche popularity among the hip-hop dance crowd.

The “Road to the VMAs” show itself was the stuff of fan dance dreams. Questions about if Super Cr3w could beat Quest Crew, or if the imagery of I.aM.mE could compete with the athleticism of the Elektrolytes could finally be answered. America became the final choosers of the champion, and they responded with more than 95 million votes.

For the first five episodes, that honor fell to the new judges. Producer T-Pain, singer-dancer Teyana Taylor, and Broadway and Internet celebrity Frankie Grande filled in ably in judges’ chairs vacated by rotating personnel that always included JC Chasez of N*Sync and rapper Lil Mama. The judges’ opinions were mixed with the online votes to determine the overall champion.

Now that the end has come, questions arise about whether the show will be picked up again, and where it can go creatively. Since it was created and, in a sense, modeled after Hip Hop International’s dance championships, maybe an international flare? World’s best dance crew? There are other ideas floating about.

“I love that ‘ABDC’ was tied to the VMAs (since I’ve produced the VMAs before) but for the next season of ‘ABDC,’ I love the idea of turning the show upside down with a new competition concept, Crews Versus Champions, where each week the amateur dance crews compete, not just against each other but also with a past ‘ABDC’ champion,” says Jane Mun, executive producer and showrunner for “ABDC.”

The executive, who has also produced the Primetime Emmys and the People’s Choice Awards, thinks the concept could heighten the level of anticipation even more from week-to-week.

“Think ‘Enter the Dragon’ where Bruce Lee entered different floors and had to beat out his opponents in each level to make it to the next round. Knowing the caliber of the dance crews out there now, Crews versus Champions can be a new exciting season.”

Howard and Karen Schwartz, the couple who created HHI, and subsequently developed “ABDC” as executive producers alongside Randy Jackson, have hopes that the show can continue without the long layoff but are perfectly happy with how HHI reaches out to dance crews around the world to spread the message of unity through dance.

“What we’ve witnessed this season from our ‘ABDC’ champions is how much they have evolved over the years, to awe us each week with their incredible performances. With the next generation of crews ever evolving, we could only imagine what future seasons will bring,” said Howard and Karen Schwartz in an emailed response to the question of the show’s future.

As for this season, the crews have their own ideas on where the show can go. Reached by email, their approaches are as different as their dance styles. For the b-boys of Super Cr3w, it is just a matter of supply and demand: “The show will probably continue on as all things do. There is a demand for dance, specifically dance at the highest level.”

Kinjaz takes a more philosophical approach: “Dance, as a culture, is never going away. It’s ALWAYS been around, it has a rich history, and will always evolve. It just needs a proper platform and audience. We believe the show concept itself is a huge opportunity for dance crews in America.”

All-star winners Quest Crew would like to see it continue for a new generation of dancers and know that its popularity is still high. “It’s sad to think there might not be an opportunity like this by the time they’re ready. The all-star crews have inspired even more people to dance and dream, and [we] hope ‘ABDC’ stays around to give them something massive to aspire towards, in any shape or form. We can attest that it’s a star well worth shooting for.”

As the crews prepped for the finale, the behind-the-scenes executives were probably prepping for what was to come. There’s still a desire to see dance on TV, with “So You Think You Can Dance” and “Dancing With the Stars” co-existing and enjoying success. There’s even a new dance competition special, “#Dance Battle America,” premiering on Sept. 14 on ABC.

Logistically, Mun says producing “ABDC” is “like producing the VMAs every week,” and she enjoyed the experience.

“I never feel like I’m working but workshopping amazing production numbers that happen to get captured for TV,” said Mun. “I realized that if you give these artists a platform to showcase their talent, the sky is the limit.”